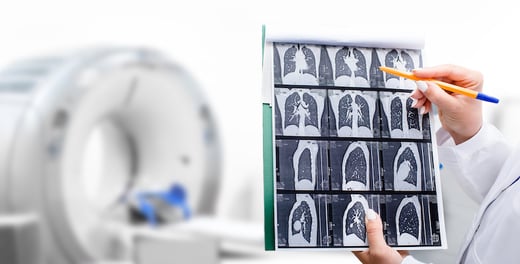 Patients with NSCLC, the most common type of lung cancer, are often treated with surgery, chemotherapy, radiation therapy, targeted therapy, or a combination of these treatments. Those with metastatic lung cancer (stage IV) are eligible for biomarker testing to determine if there is a genetic mutation causing the cancer cells to grow. The results of these tests tell your oncologist if there is a targeted therapy that would work well.

Patients with SCLC are typically treated with radiation therapy and chemotherapy.

The best combination of therapies for each patient will be dependent on the type of lung cancer, stage and your overall health condition. Your oncologist is likely to recommend one or more of the following:

Chemotherapy is a cancer treatment that uses drugs to stop the growth of cancer cells, either by killing the cells or by stopping them from dividing. The way the chemotherapy is given depends upon the type and stage of the cancer being treated.

There are two types of radiation therapies:

Surgery is most commonly used to treat early stages of NSCLC. While it can be an option for some early-stage SCLC, it is rarely used as the primary treatment since SCLC has usually spread past the lungs at the time of diagnosis. Lung cancer surgery can involve removing a portion of the lung or the entire lung through procedures such as lobectomy, segmentectomy, wedge resection, and pneumonectomy.

Even if the doctor removes all of the cancer that can be seen at the time of the operation, some patients are treated with chemotherapy or radiation therapy after surgery to kill any cancer cells that may remain. Treatment that is given after surgery to lower the risk of the cancer coming back is called adjuvant therapy.

Immunotherapy, also called biologic therapy, is designed to help your immune system fight cancer. It uses materials made either by the body or in a laboratory to improve, target, or restore immune system function so it can identify and destroy cancer cells.

Other types of immunotherapy that are being studied in clinical trials include cancer vaccines and adoptive T cell therapy.

Targeted Therapy Based on Biomarkers

Targeted therapy is a type of treatment that uses drugs or other substances to identify and attack specific cancer cells. This precision leaves healthy cells alone, reducing the side effects that often come with other types of treatment, such as chemotherapy and radiation therapy. Monoclonal antibodies, tyrosine kinase inhibitors, and mammalian target of rapamycin (mTOR) inhibitors are three types of targeted therapy being used to treat certain types of lung cancer.

Non-small cell lung cancer patients may go through some testing for genetic mutations in the cancer cells, called biomarker testing or genomic testing. Biomarker testing looks for changes in the DNA that may have been caused by exposure to things in the environment known to harm the lungs. The type of genetic mutation that’s found will direct the first line of treatment that’s recommended. If no biomarkers are found, there is a different approach recommended. This cuts down on the time taken to try various therapies in hope of finding the one that works best for a particular patient.

Patients who do not test positive for a biomarker with an approved targeted therapy are going to receive a different recommended treatment plan. They may also be eligible for a clinical trial that is identifying treatments based on other biomarkers found outside of those with an established targeted therapy. l that is looking at treatments for a number of other markers.

Laser therapy is a cancer treatment that uses a laser beam (a narrow beam of intense light) to kill the cancer cells. It is sometimes used to open up the airways of patients whose cancer is making it hard to breathe.

While you are under general anesthesia, the oncologist inserts the laser with a bronchoscope and then aims the beam at the tumor to burn it away. If needed, the treatment may be repeated.

Recently, many new lung cancer treatments have been approved and used in combination with long-standing treatments. For some types of lung cancer, the new treatments even replace the first line of treatment previously given. Compass Oncology has clinical trials available to our lung cancer patients who qualify.

If you have been newly diagnosed with lung cancer, the first step is to schedule a consultation with an oncologist. If you are in the Portland, OR, or Vancouver, WA area, we offer personalized treatment plans and second opinions on treatment. Learn more about the lung cancer specialists at Compass and why you should choose us for your lung cancer care. Find a location near you to consult with an oncologist about your specific diagnosis and treatment plans.