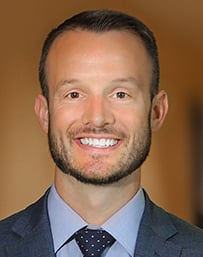 Radiation Oncology, Hospital of the University of Pennsylvania, Philadelphia, PA

Diplomate of the American Board of Radiology in Radiation Oncology

Dr. Arscott believes in a collaborative approach to patient care, which includes working with the patient’s entire care team and bringing the patient into the discussion when coming up with a treatment plan. He is trained in all areas of Radiation Oncology, particularly in modern radiotherapy approaches to treat cancers (hypofractionation, IMRT, IGRT), stereotactic body radiotherapy (SBRT) and radiosurgery (SRS), as well as Palliative Radiation Oncology.

He has a special interest in the incorporation of new technology to improve outcomes and reduce treatment-related toxicities, as well as the use of new technologies to assist patients in their path through cancer treatment. He has published numerous articles in peer-reviewed journals and presented his research at national and international scientific meetings.

Dr. Arscott grew up in the Bay Area in California, as the second of four brothers. He completed his undergraduate and medical studies in Vermont. He also spent two years at the National Institutes of Health (NIH) in Bethesda, Maryland as part of a Howard Hughes Medical Institute training program, during which he performed clinical and translational research in Radiation Oncology, with a focus on gliomas. He completed his internship in Internal Medicine at the Hospital of the University of Pennsylvania in Philadelphia, and then 4 years of training in their Radiation Oncology Program.

Dr. Arscott lives in Portland with his husband. They enjoy running, climbing, exploring the outdoors, cooking, and traveling.