Oncologist Confidential: I Want My OR to Be "A Joyous Place"

Toni Storm-Dickerson, MD, wants her operating room to be "a joyous place," she said, "because this is an opportunity to kick cancer's butt and give people back their lives." 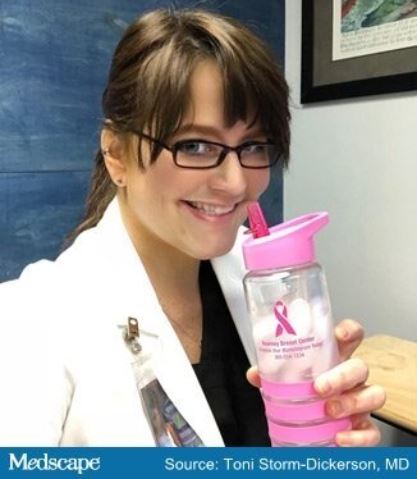 Storm-Dickerson is a breast surgical oncologist and co-director of Compass Breast Specialists in Vancouver, Washington. The following account of a conversation between her and Medscape Medical News editorial intern Dana Najjar has been condensed and edited for clarity.

Tell us about your practice and what drew you to it.

I'm a surgical oncologist and I specialize in breast cancer care. One of the things that's a big surprise to people, they think of breast cancer as being a disease of the elderly, and it's really not. About half of my practice is 50 and under. Women in their most productive years are among some of the women that are getting breast cancer more frequently.

What's something about the healthcare system that concerns you?

It concerns me in medicine the way that we're reimbursing for different kinds of oncoplastic surgery for women. In other words, if I do a lumpectomy on a woman, I want to use the standard for pretty cancer surgery so she's left feeling as beautiful as possible, so that every time she sees herself naked after the shower she's not reminded that she had breast cancer.

If we take a large tumor out of a woman, oftentimes you want to do a contralateral procedure, meaning you want to give them a lift on the other side so they match. The law since 1998 is that women who have a mastectomy, insurance will pay for them to have reconstruction. But the problem, especially with Medicare and Medicaid, is that they pay so poorly you can't get a plastic surgeon to do it. If I have a 65-year-old woman who's on Medicare and I want to do a very big lumpectomy, and she doesn't have symmetry, then I'm either trying to fix the other side myself ― I'm not a plastic surgeon, and insurance doesn't pay me for that ― or she's left asymmetrical.

Describe an interaction with a patient that left a lasting impression.

She's 26 years old and when she was 24 or 25, she noticed some changes in her left breast with her nipple pulling back. She went to a primary care doctor and they told her nothing was wrong, she was too young. Six months later it was worse, and she was concerned, so she went to family planning and they sent her for an ultrasound, which was the right thing to do.

The folks who did the ultrasound did not actually look at her and they read the ultrasound as normal because every ounce of the picture was involved with tumor. Instead of seeing that it was one giant tumor, they thought that it was normal breast tissue. Again, context matters. They told her it was nothing and she was sent away. Then 6 months after that, she went to a gynecologist, who called me up and said, "I'm probably being crazy, but would you just see her?" And she was diagnosed with stage IV breast cancer now, at the age of 27. And she's a beautiful, brilliant soul.

She's doing great right now. Do I think that her cancer will get her? Yes, I do. But not right now.

What's one thing you wish you had done differently in your career?

I don't know that there are things I would have done differently, but there are things I've learned. You're stupider when you're young, and I'm not that smart now. You and your family matter, and you have to take some time, because in medicine we're always putting things off for the future, everything's always delayed, and life is precious. I'm not saying don't work hard, just balance it out, have proper boundaries, and always do something you love.

What would your colleagues say is the most difficult thing about you?

Probably that I'm pushy. I think that our strengths are our weaknesses. When I have a patient and they're feeling really bad because they're scared or they're worried, I say quit worrying, because God is perfect. That doesn't mean you don't work on things ― we still have a responsibility to work on who we are ― but some of us are a little more hyper, like me, and that's just the way it is. I try to use it for good, not bad.

What's the most unusual item in your office?

There's tons of weird stuff in my office. I have so much boob stuff. Boob pen holder, I have crazy boob paintings people have given me, I have this coffee cup that has all kinds of boobs on it. I have all these funny things, and they're all gifts from somebody.

I love listening to music when I operate. I think that it's important that the operating room be a happy place, even a joyous place, because this is an opportunity to kick cancer's butt and give people back their lives. I always tell my patients it's not an easy day, but it's a good day.